Last weekend brought me on several cool adventures, and I thought I would share the most photogenic here.

On Sunday I took a trip up to the old capitol, Ayutthaya. The city lies just north of Bangkok, about two hours by the slow third class train. The trip costs 20 baht (about $0.70) each way, and is oftentimes filled to standing capacity with Thai people commuting to the city for work and tourists headed to and from the historic destination. Here is a picture of the inside of the train the day that I went:

Autthaya has grown and remains relevant and is today a moderately-sized city with many modern buildings and permanent residents. The remnants of the old city, which you can see in my pictures below, are scattered throughout the new city. To give you a good idea of the distance, the best way to get around would definitely have been by bicycle. Due to my exceptional planning discipline, I did a lot of walking that day.

The city was founded circa 1350, and some historians estimate that it had as many as a million residents in the year 1700. This would make it one of the largest cities at the time, home to the mighty Siamese empire. The architecture leftover from those times long past are as grand as could be expected. Most of the structures I visited and have pictured here were built in the 1500’s. Here are some of my favorite pictures from the day: 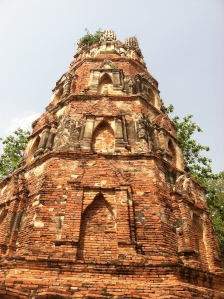 These bricks are, I’m sure, leftover from when the Siamese peasant workers finished the job 500 years ago:

And this is how far the state has come since. What a truly great day to be a Grizzly.